Fractions are somewhere between a number and a whole number. They have parts, like 5/5 and 3/4, but they are not exactly equal to any single one of their parts or the total. If you’re confused about what fractions are or how to use them, don’t fret! This tutorial is designed to break down fractions so you can start working with them in your algebra class or math homework.

Parts of a Whole

Fractions are numbers that represent a group of parts of equal size. Like a cookie might be divided into eight pieces, making the eight pieces one-eighth of the cookie, fractions are numbers that represent parts of something. To understand how fractions work, try breaking down a piece of candy into equal parts and creating a fraction out of those parts.

For this example, we’ll use M&M’s® candies because they’re colourful to help us see the fractions, but you can use any candy that works for you.

To divide a piece of candy into equal parts, draw a line across the centre of the candy and then continue dividing with as few sides as you can get away with (that’s how we get to one-fourth in this instance).

When you’re trying to break down a fraction, you sometimes have to start working backward. Sometimes that means starting with the whole amount and working your way down to the pieces, but other times it means finding factors that are common between the whole and the fractions. To do this, you need to think about what is the same and what is different in the whole and the parts.

Let’s go back to our M&M’s® candy example. Currently, we have four whole candies and need to divide them into eight equal parts. How do we do that? First, write down the whole amount (4) and then write down how many parts you want (8). Now all you need to do is find factors that are common between 4 and 8. What are the factors of 4? 4, 2, and 1 are all factors of 4. What

are the factors of 8? 1, 2, 4, and 8 all work because they divide perfectly into 8. Use those two lists to build a chart with what is common among the two numbers on either side of the division bar.

The next step is to use the factors that are common in both the whole and the parts. In this case, since 4 divides exactly into 8, 4 is a factor of 8, and 2 is a factor of 4. So we can divide 8 into equal parts using 2 as our divisor (the number in the division bar that we want to divide).

To find out what those factors are, look at the division bar on both sides of 8. On one side it says “8” and on the other side it says “4.” Think about what you know about division.

When you’re working with factors, you have to remember that the factors can be computed. That is, you can add or subtract them together to find the original number.

If we have five cookies and we want to divide them into three equal parts, we would start by adding 2 and 3 together to find 5. We know that 5 is one greater than three, so we would take one cookie away from our original five cookies.

Now that you have a basic understanding of how factors work with fractions, let’s go back and take a look at some problems using the same concept and making it all a little easier!

Fractions can also be represented as a product or a multiplication problem. This is useful when you need to think about fractions in terms of multiplication and division problems instead of addition and subtraction. To figure out how many equal parts something is, all you have to do is multiply the factors together.

Now let’s do the same technique on a division problem.

To help you see the difference between multiplying and dividing factors, let’s go back one more time to the idea of four equal parts. If we divide 4 into eight equal parts, what would be the fourth factor? 4 divides exactly into 8 with no remainder (we wrote 8 as a whole number). So the fourth factor is 1/8.

When you work with fractions, it’s easy to understand if you break down the whole and the parts first. The numbers in a fraction represent parts of a whole. Just like if you have one cookie and want to split it into three equal pieces, you would take a fourth of the cookie away to make four equal pieces. 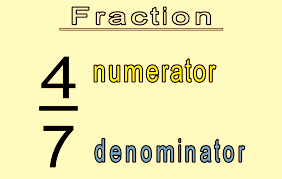